Attracting more mainland students is crucial for diversity in the increasingly competitive world of tertiary education, an influential UK figure in the sector has said.

However, Julia Goodfellow said the University of Kent, where she is vice chancellor, is not looking to increase its number of mainland students – also for the sake of diversity.

“Universities [in] Germany, and France are now providing postgraduate courses in English, which means there is more competition [for international students],” said Goodfellow, who was in Hong Kong to meet with alumni to celebrate the university’s 50-year anniversary.

Goodfellow, who will begin her two-year term as head of the Universities of UK – an umbrella group representing heads of higher education bodies in the UK – in August, added: “It’s about maintaining [current mainland students] … but also the international student body [not] being dominated by one nationality.”

Her view may offer some insight to local universities on how to sharpen their competitive edge – by maintaining the intake of mainland students, as well as looking for more international students. 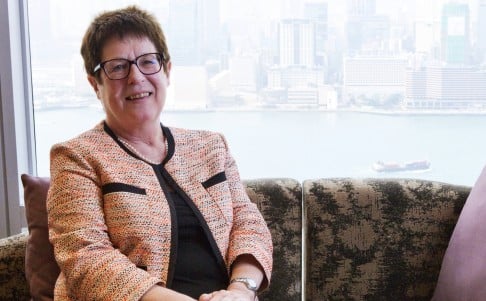 China accounts for 37 per cent of all international postgraduate entrants in England in the year 2013-14 – compared with 25 per cent in 2010 – according to a report by the Higher Education Funding Council for England. A total of 31,195 mainland Chinese students entered postgraduate programmes in England.

“We have noticed that most mainland students come to [the University of Kent] for our postgraduate courses … our Hong Kong students tend to be in the undergraduate section,” she said.

In the year 2013-14, the number of Hong Kong students increased by 13 per cent from the previous year. There were a total of 54,250 new international undergraduate students entering English universities in 2013.

The University of Kent’s vice chancellor said she had not noticed any particular difference between students graduating in A-levels, which Hong Kong stopped using in 2012, and those who graduated under the Diploma of Secondary Education.

“We deal with students from over 50 countries with different education systems. Even if one of the countries changes their system, we’ve been able to cope with it,” she said.

While many universities have capitalised on their university name brands and opened schools overseas, Goodfellow said the University of Kent has no such plans, preferring to form partnerships with local universities and schools instead.